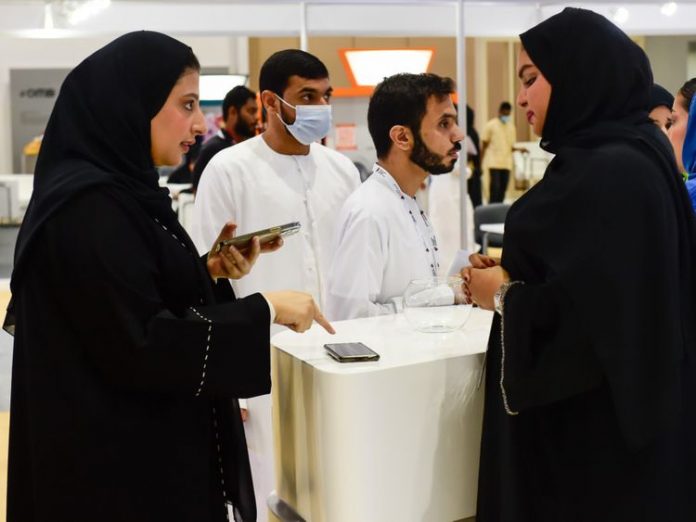 Under the patronage of His Highness Dr. Sheikh Sultan bin Mohammad Al Qasimi, Supreme Council Member and Ruler of Sharjah, the 24th edition of the National Career Exhibition kicked off today (Tuesday) at Expo Centre Sharjah.

Organised by the Expo Centre with the support of the Sharjah Chamber of Commerce & Industry (SCCI), the three-day event was inaugurated by Sheikh Khalid bin Essam bin Saqr Al Qasimi, Chairman of the Department of Civil Aviation.

The inauguration ceremony was attended by representatives from ministries, establishments, government and private bodies, and leading corporates in the UAE.
Sheikh Khalid toured the exhibition after being inaugurated and met with a number of representatives of the participating bodies and Emirati companies, where he was briefed on employment and promising job opportunities offered by the fair to national cadres and young graduates.

During his tour, Sheikh Khalid was accompanied by Ali Mehd Al Suwaidi, Chairman of the Sharjah Consultative Council (SCC), Dr. Tariq Sultan bin Khadim, Member of the Executive Council of the Emirate of Sharjah and Chairman of the Department of Human Resources (SDHR), and Salem Ali Al Muhairi, Chairman of Sharjah Municipal Council.
This is in addition to Saif Mohammed Al Midfa, CEO of Expo Centre Sharjah, Mohammed Ahmed Al Mulla, Secretary-General of the Sharjah Education Council, as well as a number of members of the board of directors of the SCCI and Expo Centre Sharjah, dignitaries, senior officials and members of the diplomatic corps
Sheikh Khalid was briefed on the advisory programs and training courses made available to help young people refine and develop their skills and improve their ability to meet labor market demand.

“The National Career Exhibition is one of the most important national initiatives and one of the largest events that supports the UAE government’s efforts in this regard. It is a leading platform for attracting national cadres, providing job opportunities, and allowing young citizens to learn about labor market trends,” Sheikh Khalid Al Qasimi said, calling on the participating government and private bodies to contribute to making suitable job opportunities available for young citizens.

For his part, Abdullah Sultan Al Owais, Chairman of Sharjah Chamber of Commerce and Industry and Chairman of Expo Centre Sharjah, said that the gathering paves the way for attracting national human cadres to work in many specialized, technical, and administrative jobs, thereby contributing to the achievement of the goal set by His Highness Dr. Sheikh Sultan bin Mohammad Al Qasimi, Supreme Council Member and Ruler of Sharjah, to provide a decent life for citizens and ensure their stability and well-being.

Meanwhile, Saif Mohammed Al Midfa stated that over the past two-decades, the fair had a significant impact on the recruitment of thousands of graduates in government and private sector institutions and played a significant role in providing an attractive work environment for national human cadres and Emiratizing various labor sectors. Al Midfa emphasized that the show has also strengthened bridges of communication between youth on the one hand and between various public and private sector institutions on the other.

“Through this year’s exhibition, and in cooperation with our strategic partners, we are paying particular attention to developing young national cadres, enhancing their practical experience and skills, supporting their innovative ideas, and preparing them to meet the requirements of future jobs,” he said.

The current edition of the exhibition witnesses an impressive participation by the Ministry of Defense, the Department of Human Resources in Sharjah, the Sharjah Economic Development Department, Sharjah’s Environment and Protected Areas Authority (EPAA), Sharjah Foundation to Support Pioneering Entrepreneurs (RUWAD), which receive applications from job seekers wishing to engage in various business sectors in the country,

The event also offers many promising job opportunities, particularly in banking and financial institutions, as it brings together some of the leading banks and financial institutions operating in the country, including the United Arab Bank, the Emirates Institute of Banking and Financial Studies (EIBFS), and the Sharjah Islamic Bank.
The exhibition is open to the public on Wednesdays and Thursdays from 11 a.m. to 6 p.m.