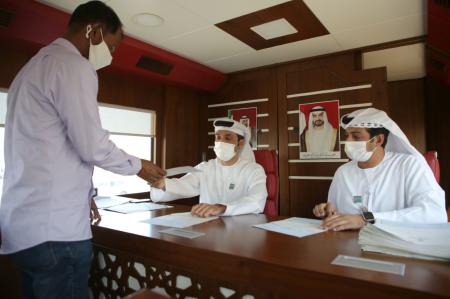 The Abu Dhabi Labour Court has successfully secured the payment of the financial dues of 2,794 workers in 4 companies, amounting to a total of 40 Million dirhams, by taking prompt legal measures and ending the disputes by moving directly to the workers’ place of residence onboard the Mobile Court, to hand over their financial entitlements in accordance with the Court decisions issued in their favour.

The Abu Dhabi Labour Court affirmed that the speedy settlement of cases and the handing over of dues to the claimants for the sake of an accomplished justice is one of the main objectives of Abu Dhabi Judicial Department (ADJD), in line with the vision of His Highness Sheikh Mansour bin Zayed Al Nahyan, Deputy Prime Minister, Minister of Presidential Affairs and Chairman of Abu Dhabi Judicial Department, to develop a pioneering system that reinforces confidence in the judicial system, which in turn will reflect on the growth and investment movement.

The Abu Dhabi Labour Court pointed out that it has adopted a clear mechanism to deal with collective disputes and settle the same in record time, by facilitating and expediting the registration of the claims, hearing the cases and delivering judgments with the entitlements of each worker separately with expedited enforcement. A Court order was also issued to maintain the workers at their place of residence and prevent their evacuation until they receive their entire entitlements, as well as to take the necessary steps to transfer the residence of the workers who so desire to other companies, in coordination with the relevant authorities.

The Labour Court explained that the mechanism adopted enables all parties to obtain their rights as guaranteed by law, as part of the UAE’s commitment to safeguarding workers’ rights and providing them with the necessary protection under the rule of law, through an advanced judicial system that plays an important role with its partners in maintaining the security and stability of society.