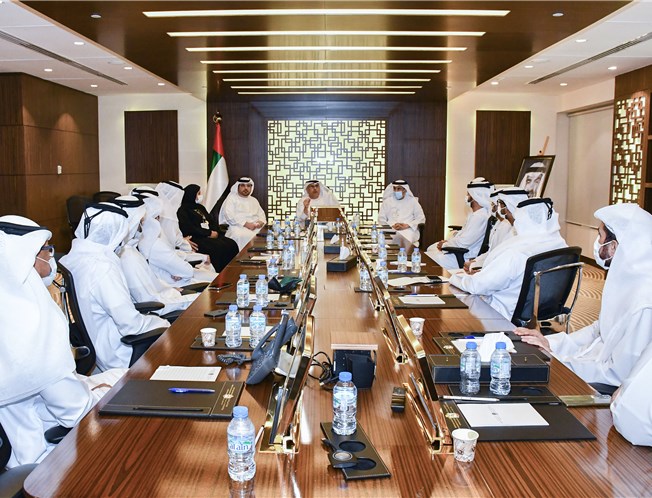 His Excellency Dr. Abdulrahman Abdulmannan Al Awar, Minister of Human Resources and Emiratisation, highlighted the significant role of inspection and labour relations teams, calling on the employees of the Ministry of Human Resources and Emiratisation (MoHRE) to continue coordinating with relevant government entities to unify efforts for effective institutional partnerships.

In a meeting with MoHRE team, he emphasised that collaborations will ensure the implementation of the Employment Relations Law, its implementing regulations and ministerial decisions that regulate the local business environment, which boosts the UAE’s attractiveness and competitiveness globally.

His Excellency Dr. Al Awar commended the efforts of MoHRE’s team of inspectors and Labour Relations Department employees and their ability to efficiently deal with labour issues while closely cooperating with other relevant government entities.

Al Awar directed MoHRE’s employees to spare no effort in ensuring the UAE labour law is enforced to enhance the UAE’s position as one of the best global destinations to work and live, and attract talent, companies and investments. He noted that the status the UAE has achieved is supported by highly competitive components, most notably the advanced legislative system and the stability and flexibility of the work environment, as well as lack of labour disputes, which is proved by global indicators.

“The efforts of the inspection team reflect the commitment to the regulations governing the roles, rights and responsibilities of all contractual parties. Thus, enhancing the attractiveness of the job market and its ability to gather qualified local and international talents to contribute to building the world’s best and most active economy,” he added.

His Excellency Dr. Abdulrahman Al Awar listened to the employees’ inputs and suggestions for developing workflow mechanisms and ways to improve the quality of services, in addition to their proposed initiatives and the challenges they face, especially in field work. He assured them of the ministry’s keenness to facilitate their tasks, given the significance of their contribution to the development of a stable and prosperous job market.

At the end of the meeting, His Excellency thanked all the ministry’s employees, pointing out that their work is a national responsibility that pushes them to contribute to creating an attractive environment for top talents.