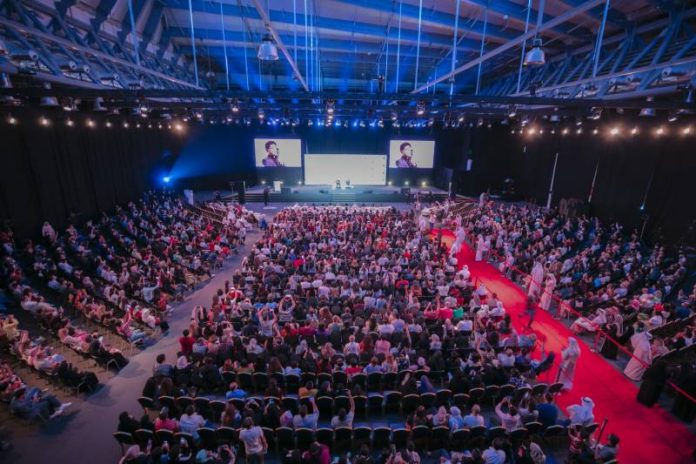 Under the theme ‘Spread the Word’, the 2022 edition of SIBF runs between 2nd-13th November with the participation of 2,213 publishers from 95 countries.

His Highness the Ruler of Sharjah marked the opening of SIBF 2022 by welcoming the gathering of eminent writers, intellectuals, publishers and leading thought leaders from the region and across the world to a vibrant new edition of the annual book fair.

His Highness said, “The opening of the 41st SIBF marks the beginning of a celebration of 12 days of cultural activities and is an opportunity for children, youth and families across the UAE to enrich their learning in arts and sciences and forge close connections with cultures across the world through books of diverse genres at the fair.”

His Highness continued, “The past edition of the annual Sharjah International Book Fair witnessed the launch of 17 volumes of the Historical Corpus of the Arabic Language and this year, we are launching a new set of 19 volumes. These 36 volumes document nine letters of the Arabic alphabet and I would like to express my gratitude to the researchers, linguists, and experts for their untiring dedication and efforts that have led to this great accomplishment.”

Power of the written word in building civilisations:

The inaugural ceremony commenced with an artistic show featuring a blend of creative digital imagery and live performances echoing the message of the importance of the word and its impact in building and nurturing civilisations. The show conveyed the key message of the SIBF 2022 theme, Spread the Word, with an inspiring commentary that said “Everything begins with a word. The mind gives shape and form to the word through meaning which helps build civilisations and nurture generations.”

The inaugural ceremony also screened a short film documenting the progress of the Historical Corpus of the Arabic Language. Representatives of various Arab Language Academies who had a pivotal role in producing the new volumes of the Corpus also took a group photograph with the Ruler of Sharjah at the event.

Largest book fair in the world:

In his keynote address, SBA Chairman Ahmed Al Ameri announced that for the second year in a row, SIBF had emerged as the largest book fair in the world in terms of buying and selling copyrights in 2022.

The SBA Chairman said, “The Sharjah International Book Fair has a history that spans 40 over years and has cemented the foundation of the emirate’s future for a century ahead! My hearty congratulations to Sharjah and the UAE on this momentous occasion! This feat is founded in the wise vision, unwavering support and relentless efforts of Your Highness… You have our sincere gratitude.”

SIBF has become the first in the region to top the world book fairs for the second year in a row in terms of buying and selling of copyrights. The distinguished honor comes as the three-day SIBF Publishers Conference that hosted 1,041 publishers and literary agents concluded with 958 tables set for the matchmaking meetings.

For his part, Sudanese historian Yusuf Fadl Hasan, expressed his gratitude to His Highness the Ruler of Sharjah Ruler for conferring him with the distinguished honor of Cultural Personality of SIBF 2022.

He said, “I recollect the visit of His Highness to Khartoum in 1974 and thank him for taking a keen interest in our work at the African and Asian Studies Institute. With deep gratitude, I remember his efforts to foster dialogue between the Arabic nations and African continent and for continuing to support this journey of communication amongst global cultures through hosting conferences and other events in Sharjah.”

In his address, Lorenzo Fanara, Italy’s Ambassador to the UAE, asserted that Sharjah is the Cultural Capital of the world and has “spread the word of books and knowledge across nations.”

Thanking the Sharjah Ruler, the Italian Ambassador said, “Your Highness has sculpted the name of Sharjah in the history of culture.”

He added that through its activities as Guest of Honour at SIBF 2022, visitors can discover the common values shared between Italy and the Arab nations.

Describing how the roots of commonly used words and names in his home country are derived from Arabic, he said, “These names emphasise our common history. By sharing a common history, we share common values and through these cultural values, we can overcome divisive agendas and forge a future founded on openness and knowledge for the next generations.”

After the opening ceremony, His Highness toured the exhibition inspecting the stalls of participating publishing houses, including the Guest of Honour pavilion, where he was briefed on the events and activities that will be organised throughout the 12-day book fair.

Well Being at work Middle East 2023