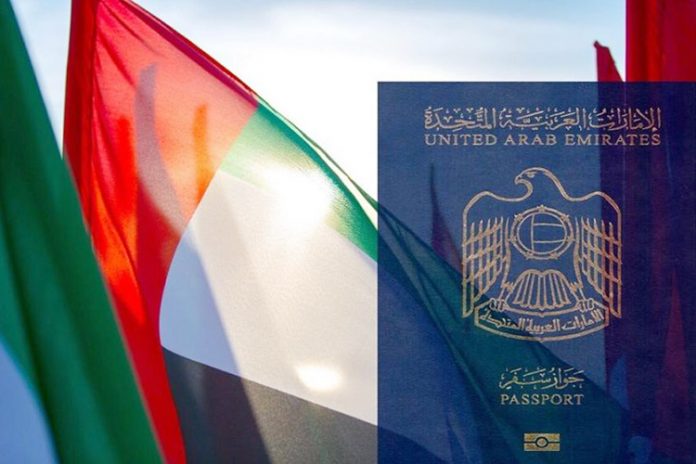 The Federal Authority for Identity, Citizenship, Customs and Port Security (ICP) today announced the launch of the third generation of the UAE Passport and the trial run of the new Advanced Visa System, which will come into effect starting 3rd October, 2022.

The new generation of services was developed in line with the highest security and technology standards to facilitate procedures for customers and accelerate the UAE’s economic and sustainable development drive.

The latest batch of services were launched during a ceremony held at Emirates Palace, in the presence of the ICP Chairman, Ali Mohammed bin Hammad Al Shamsi, as well as the Authority’s executives and officials and a number of its partners.

In his opening speech, the ICP Chairman affirmed that developing services for customers of all categories is the Authority’s top priority, adding that the dedicated efforts of ICP’s teams have helped make major strides, especially in terms of innovating new services that boost customer satisfaction.

He explained that the launch of the third generation of advanced services is yet another testament to the Authority’s commitment to realising the directives of the UAE leadership to fully digitise all services and develop pioneering services.

Al Shamsi added that the new generation is more comprehensive and covers all beneficiary categories, including citizens, residents and visitors, through an integrated ecosystem of services, systems, projects and initiatives.

The launch of the new generation services is a huge step in our journey towards the future, as it enhances the UAE’s tourism appeal, especially as our ambitious future vision will help revolutionise government services for generations to come, he continued.

The Authority had held a press conference earlier announcing the launch of third generation of the UAE Passport and the trial run of the new Advanced Visa System.

During the press conference, the ICP said that investors, business owners, residents, visitors, talents and job seekers may avail the new advantages offered through the UAE’s upgraded visa system.

All categories may avail the services offered through the new visa system by visiting the ICP’s website or using the smart application, which will be operational after the implementation of the new regulations to come into force on 3rd October, it added.

Major General Suhail Saeed Al Khaili, ICP Director-General, lauded the UAE Cabinet’s resolution to adopt the executive regulations of the federal law regulating the entry and residence of foreigners in the UAE at such a critical juncture.

He also pointed out that the new UAE passport and the issuance of the new regulations, including benefits, facilities and new and diverse categories of visas, will meet the needs, ambitions and hopes of citizens, residents, investors and those wishing to work and live in the UAE.

He then highlighted the keenness of the UAE’s leadership to reunite families and enhance the quality of their lives and invest in the potential of people with talents and expertise, who might contribute to driving economic growth and sustainable development, as well as its efforts to attract capital and talents from around the world.

Al Khaili added that the new updated visa system involves streamlined processes, controls and procedures, and new facilities that support the authority’s approach to providing pioneering services, which align with the Principles of the 50, and meet the future needs of all categories of foreigners and residents.

Holders of valid UAE passports can use them until their expiry, and then apply for the new passport through the ICP’s website or smart application or the country’s embassies and consulates, he further added. The new UAE passport has a new modern design and has the latest technology and security features.

“The new generation of the passport is printed using laser technology on polycarbonate material, rather than paper, which makes it difficult to damage, tear or forge, and ensures faster printing and greater security,” Al Khaili said.

Major General Sultan Yousef Al Nuaimi, Director-General of Residence and Foreigners Affairs at ICP, said that the new executive regulations of the federal law will include an updated visa system that will help drive sustainable development and economic diversification, by attracting skilled labour, experts and talents to the country.

The Advanced Visa System comprises many residency types and the addition of new ones to cover all segments of investors, entrepreneurs, scientists, specialists, high-achieving students and graduates, humanitarian pioneers, frontline workers and skilled labour in all fields, in addition to streamlining procedures, he added.

Major General Khamis Al Kaabi, Director-General of Support Services Affairs at the ICP, stated that the authority has taken all necessary measures to ensure the successful implementation of the new visa system in record time.

He noted that the new system offers many facilities, including the renewable 5-year Green Residence visa, which offers many advantages, such as enabling the holder to easily issue residence permits for family members and flexible grace periods of up to six months after expiry or cancellation of residence visa.

Al Kaabi explained that the Advanced Visa System offers new advantages to Golden Visa holders, which include the visa remaining valid regardless of how much time the holder spends outside the UAE, removing the limit on the number of sponsored domestic labourers, in addition to enabling family members to stay in the country during the visa’s validity period even after the sponsor (holder of the golden visa) dies.

He added that the new visa system allows entry into the country for an array of purposes with flexible visit periods and easy renewal for up to one year, without a sponsor requirement, enabling visitors and job seekers to achieve their ambitions.

Those wishing to learn more about the third generation of the UAE Passport and the Advanced Visa System can do so through the authority’s website
https://www.icp.gov.ae, and its UAEICP app.

The ceremony also saw the graduation of the first cohort of professionals specialised in the field of identity and citizenship law from the Emirates Academy for Identity and Citizenship, as well as a ceremony honouring the Authority’s strategic partners and retired veterans.

During the ceremony, the ICP Chairman honoured the ICP teams, partners and graduates of the Emirates Academy for Identity and Citizenship’s Bachelor of Citizenship, Residency and Ports Law, which is the first of its kind in the world, and a step forward in further qualifying the ICP’s employees and partners to deal with any arising challenges.

He also honoured Major-General Mubarak bin Sannan Al Mutairi, who retired after serving at the ICP for over 30 years, in recognition of his diligence and tireless efforts in developing the ICP’s work and services.