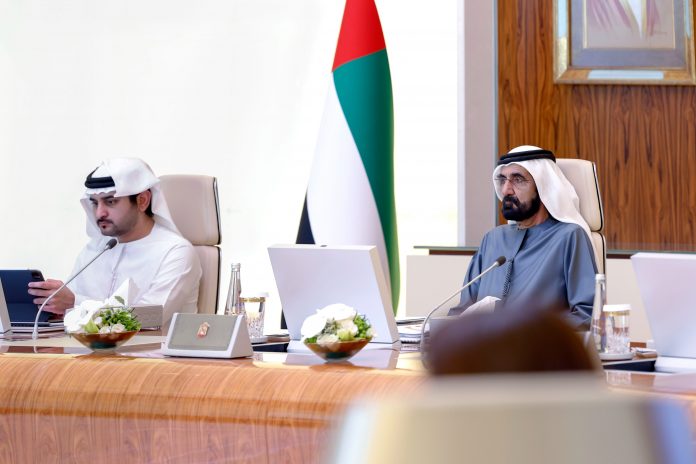 His Highness Sheikh Mohammed bin Rashid Al Maktoum said, “I chaired the Cabinet meeting at Qasr Al Watan in Abu Dhabi. We approved the federal budget 2023-2026 with a total estimated expenditure of AED252.3 billion and estimated revenues 255.7 billion dirhams… The Federal Budget is a major driver of the government’s development ambitions and plans.”

His Highness added, “We discussed the UAE-Egypt bilateral relations… Our countries maintain close ties thanks to my brother the President of the UAE and the Egyptian President… We directed to organise a celebration on the 50th anniversary of UAE- Egypt ties.”

His Highness said, “We reviewed the UAE Railway Programme… the largest infrastructure project in the UAE, linking 11 cities, 7 logistics centres and 4 international ports in the country… Under the directives of President His Highness Sheikh Mohamed bin Zayed Al Nahyan and the follow-up of H.H. Sheikh Theyab bin Mohamed bin Zayed Al Nahyan, Chairman of Etihad Rail, this project will change the infrastructure map in the country.”

According to the budget, the UAE estimates growth in revenues in the fiscal year 2023 will reach 11 percent with a growth rate of 3.9 percent in expenditures.

The social development and benefits represent the largest proportion of the UAE Federal Budget 2023 at 39.3 percent, followed by the government affairs with 38 percent of the budget. The rest of the budget was distributed to the infrastructure and economic resources by 3.8 percent, and the financial assets and investments by 3.4 percent. Other federal expenses amount to 15.5 percent of the 2023 Federal Budget.

The UAE announced organising a ceremony under the slogan “UAE and Egypt… One Heart”, which includes a three-day event in the Egyptian capital, Cairo, during the month of October. The event comes in celebration of the 50th anniversary of UAE- Egypt ties and brotherly relations between the two countries. The details of the event will be announced in the coming days.

The UAE Cabinet reviewed the developments of the UAE Railway Programme, which will work continuously to reduce carbon dioxide emissions by 70-80 percent over the next 50 years and support the country’s efforts to achieve carbon neutrality.

The UAE Cabinet meeting approved a number of decisions regarding the mechanisms adopted for implementing the Unemployment Insurance System. In addition, the meeting approved the UAE’s accession to the Gas Exporting Countries Forum (GECF), the High Ambition Coalition to End Plastic Pollution by 2040, and the Protocol Supplementary to the Convention for the Suppression of Unlawful Seizure of Aircraft issued in Beijing in 2010.

Also, the Cabinet approved several international agreements with a number of friendly countries, including Kuwait, Czech Republic, Republic of Bulgaria, Kingdom of Eswatini, and the Republic of the Congo.

Sharjah Issues Decision Allowing all Nationalities to Own Real Estate